M﻿artin Vaughan, the veteran Australian actor with a career spanning almost 50 years on our screens, has died. He was 91.

Vaughan, who was best known for his work in the 1976 miniseries Power Without Glory﻿ and Phar Lapreportedly died in October, according to the Media, Entertainment and Arts Alliance.

Born in Brisbane in 1931 to a vaudeville comedian father, at the age of 17, Vaughan moved to Sydney and pursued a number of different occupations, including steam presser, tram conductor, postman, customs clerk and bassoon player before landing his first stage role in 1963 at the age of 32 – and following that, he never found himself out of acting work.

READ MORE: Tiffany Trump’s $1.5 million wedding to go ahead after ‘flipping out’

In 1967, he moved into television, and eight years later, he won the Hoyts Prize for Best Performance by an Actor at then-AFI Awards (now AACTA Awards) in 1975, for his work playing former Prime Minister Billy Hughes in Billy and Percy.

That accolade was tied with Jack Thompson’s work in Sunday Too Far Away.

Three decades later,﻿ in 2004, he presented a story on the ABC about Hughes’ daughter Helen dying in childbirth in London.

While Vaughan saw success from his first acting role in 1963, his big break came in 1976, when he played John West in the ABC’s television adaptation of Frank Hardy’s novel Power Without Glorya 26-part series.﻿

It was for this role that he won the Logie Award for Most Popular Actor in 1977.

He has appeared in over 60 stage plays, and in 2007, he was ﻿nominated for Best Supporting Actor at the Sydney Theatre Awards for The Seed.

Vaughan’s final screen appearance was in ﻿ABC TV’s Rakewhich aired from 2010 to 2014.

He retired from acting in 2013, though, per the MEAA, continued writing up until his death.﻿ 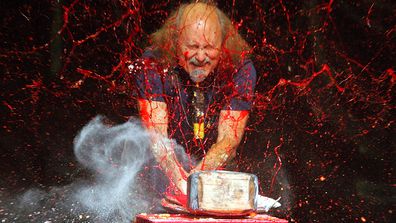