Hilaria Baldwin has finally amassed one million followers on Instagram – but fans and spectators alike are up in arms about the way in which she achieved the milestone.

In honour of his wife’s birthday on January 6, Alec Baldwin begged his own Instagram followers in a series of clips and lives to help Hilaria reach one million followers for her birthday.

In a video posted to his Instagram, the 30 Rock star said:

However, this was not the only clip posted in his campaign to get Hilaria to one million followers.

“We’re not that far away from helping her cross the line to a million followers. Social media is a big part of her platform and her work,” he said in another clip.

“I have a couple million followers and I’m hoping some of them grant my wish.”

Alec even roped in one of the couple’s children who appeared in yet another clip posted to the actor’s account in which the tot says: “Follow my mum on Instagram – please, and thank you.

Hilaria did end up reaching the social media milestone but not before she and Alec faced severe backlash for the tenuous and obscure request.

“One million followers is what’s important on a birthday?? Give me a break,” one outraged follower wrote.

“This comes off tone deaf to the outside world where families are struggling. You are wiser than this,” another spectator added.

“This is as shallow as it gets,” a third simply stated.

The Baldwins are no strangers to internet trolls. Hilaria is consistently accused of a continual attempt to portray herself as Spanish.

Other accusations include videos in which the yoga instructor’s accent seems to vary and the revelation that she often went by Hillary while growing up in Boston. But Baldwin responded by saying that she spent time in both Spain and Massachusetts and used the names based on whichever language she was speaking in. As for the fluctuating accent, she chalks that up to nerves. 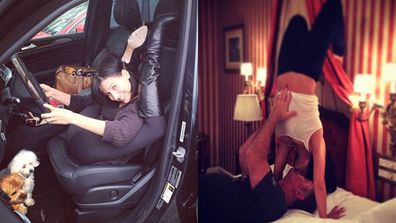 From sexy contortions in suspenders to bending over backwards for a pedi, have a flick through Hilaria’s most HILARIOUS yoga poses…

Our fave? Downward dog… with her downward dog.”/>