Despite being known to millions of people as the on-screen Dad in Sixteen Candles and Runaway BridePaul Dooley has heartbreakingly revealed his real-life estrangement from his own children.

In his recently released memoir, Movie Dad: Finding Myself and My Family, On Screen and Offthe actor, 94, writes that he quite suddenly lost contact with his daughter Robin and son Adam after the divorce of their mother, his second wife.

Soon after the divorce, Dooley would see his kids on a “regular basis” including for one month a summer.

However, Dooley then claims the children disappeared after a “great summer” together. The actor alleges that he found a letter in his mailbox from his ex-wife that said: “I’m leaving. I’m taking the kids. We’re not coming back.”

Speaking to Page SixDooley said, “I was devastated… Naturally, I was in shock and I couldn’t believe my ears and I kind of was in denial and I thought, surely this won’t continue.”

Ironically, it was during this difficult time that Dooley began to be cast in more fatherly roles in Breaking Away, Sixteen Candles and Runaway Bride.

“I ask myself, what is it about me that makes me seem so fatherly? And I thought, having lost my children and having missed them, the yearning for them becomes so much a part of me that it could actually be felt by an audience.”

Dooley hired private investigators and even took his case to the courts but to no avail. However, about 10 years later when his kids were about 18, they reached out to him by looking him up in the telephone book.

READ MORE: The tabloid front page that haunted noughties ‘it girls’ for 15 years

Eventually, Dooley first reunited with his son who soon after moved in with him into his apartment. These days both Robin and Adam both keep in touch with their dad and make multiple visits a year.

Dooley was also lucky in love following the disappearance of his children. In 1984, he married screenwriter Winnie Holzman who is best known for creating My So-Called Life and co-writing the long-running and hugely successful Broadway musical, Wicked. 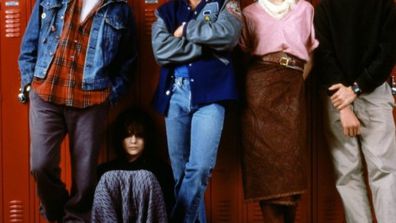 ‘Don’t you forget about me’: The Breakfast Club cast 31 years after Saturday detention