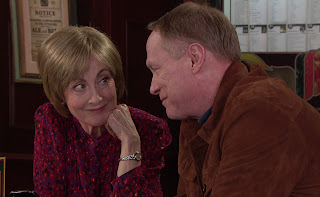 IT’S THE EX FACTOR FOR TYRONE AND PHILL Convinced Mimi is faking her injury Evelyn tells Fiz she thinks she is part of a plan to sabotage the wedding. When Hope’s bridesmaid dress gets covered in wine and Mimi blames Cerberus, Evelyn sees red and not just wine. As a slanging match ensues Phill’s annoyed with Fiz for not giving Mimi the benefit of the doubt over Evelyn. On the street, they are both stunned when a beautiful woman steps out of a car and introduces herself to Fiz as Camilla, Phill’s ex-wife. Phill is baffled as to why she has turned up but tells Fiz he can’t wait to marry her and Camilla is no threat. Meanwhile Tyrone does have feelings for his ex and spurred in by Kevin he decides he needs to tell Fiz how he feels before it is too late.

SPIDER PROVIDES A WELCOME DISTRACTION FOR TOYAH Spider reveals to Toyah that he and his fellow activists are planning to occupy the disused Nuttall’s Brewery building as a base for an upcoming protest. Toyah’s keen to get involved but Spider’s wary of her risking arrest while on bail.  Realising there’s still a way she can help, Toyah hatches a plan to get hold of the key from the desk at the Bistro.

AUDREY RETURNS TO THE STREET WHILST STEPHEN INVESTS SOME TIME IN ELAINE Audrey is discharged from hospital and Gail’s perturbed when she insists on going straight to the Rovers to celebrate. When Elaine reveals she’s planning on holidaying at the Italian lakes, Gail suggests she picks Stephen’s brain. Stephen talks to a smitten Elaine about Italy and she hangs on his every word.

ED AND STEVE HIT THE ROOF Amy informs Steve of a leaky ceiling at No.1. Steve blames Jacob’s cowboy burglar mate for making a botched job of the roof repairs. Ed collars Steve and reveals that No.3’s roof is also leaking.

AARON IMPRESSES KEVIN Aaron admires a vintage car on the garage forecourt. When Kevin admits he’s struggled to diagnose the fault, Aaron reckons it’s a blown gasket. Kevin’s scathing of the uninvited opinion.  But is forced to eat his words when Aaron is proved right. Aaron’s thrilled when Kevin offers to train him up as a mechanic. Aaron tells Summer that his new job means they can afford all the holiday excursions she wants and needn’t go near a beach. Delighted by the reprieve, Summer takes her insulin.