With a beany hat and an old rucksack

Used to climb up a tree

But where’s he left Aunt Emily?

Spider Nugent is back 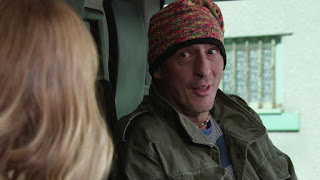 And yes, the big news of tonight is the return of 90’s eco warrior and previous love interest of Our Toyah, Spider Nugent. 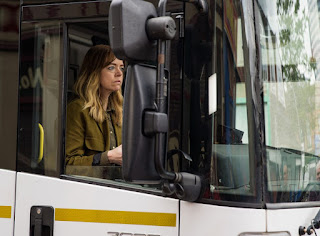 He arrives just as Toyah is in mid-protest over the council incinerating recyclable material. Not letting the small matter of being on bail for murder get in her way, Ms Battersby has organised a group of like-minded citizens to block the bin lorry. But when a few of the less zealous rebels start to drift off, she jumps into the cab with the intention of hijacking the lorry. I’m quite surprised the rest of the protesters didn’t scarper when they saw her get behind the wheel, she’s not got great form in this area. Luckily, before she can drive it into any nearby walls, Spider jumps in beside her. 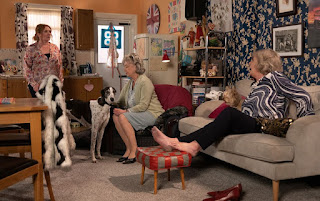 Over at No.9, Phil’s mum Mimi has arrived (still doing an outstanding impression of Dame Edna Everage). She’s been unable to find a boutique hotel that will let her stay with her dog Coco, so Fiz invites her to stay in their Tardis house, much to Evelyn’s dismay. Within about 10 minutes of getting through the door she’s on the floor, claiming that Cerberus jumped up and knocked her over. Tyrone offers to take her to A&E where she’s diagnosed with a sprained hip. I mean, that lady knows how to make an entrance. 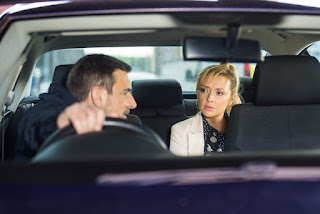 Meanwhile Peter is still griping about Thorne and refuses to forgive Simon for falling for his trick. With Carla unsympathetically telling him to get over it, he stomps out to pick up a cab fare. It turns out to be Nicky who’s at the police station. She tells him how an ex-punter recognised her in a shopping centre and got abusive, but that the rozzers arrested her instead. He tells her his Thorne story and they bond over abuses of power. Hmm I hope this isn’t going to go the way I think it is. I’m getting quite big ‘my wife doesn’t understand me’ energy from Peter at the moment. 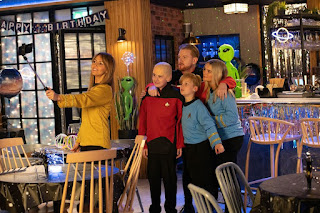 In other news Liam has a Star Wars themed birthday party in the bistro, though he seems to have come dressed as Dr Evil. They take a family photo but Maria panics about putting it on social media in case it encourages more trolling. 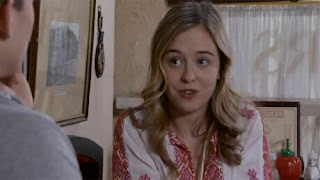 Elsewhere, happiness-sponge Summer is draining all the fun out of the Spanish holiday her boyfriend is planning. Worried about how she might look in a bikini or a wetsuit, she flushes her insulin down the sink…again! 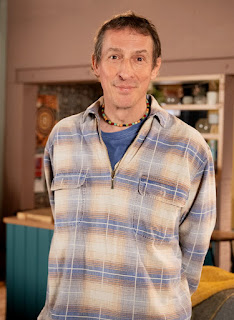 Finally, Toyah and Spider reconnect. He tells her he’s living in London and she tells him she’s been arrested for murdering her husband. And after this news, he still takes her up on her offer of staying over. Might have been the dual temptation of a vegan lasagne and a power shower. As they have a friendly hug, Kelly walks in and immediately jumps to the wrong conclusion. Which is a bit rich considering she was accused of something she didn’t do.

When Toyah leaves the room, Spider makes a surreptitious phone call to a mystery person telling them the plan is still on. What web is he spinning? See what I did there?

And that’s it for this week. Please feel free to add more verses to the Spider Nugent song in the comments or on twitter @mskelstar. Let’s get this trending. If some nonsense about sausage rolls can get to No.1 anything can happen.